Shhhh! Have you heard that “Purple Whisper Bench” by sculptor Jim Gallucci is Dearborn’s sculpture of the month in November? See the piece in West Dearborn’s Starbucks Plaza.

Described as artistic, functional and fun, it’s one of 12 sculptures placed throughout Dearborn as part of the community’s 2013-2014 Art in Public Places – Midwest Sculpture Initiative (MSI).

Funding for the project is provided by the Dearborn Community Fund (DCF) and the East and West Dearborn Downtown Development Authorities. Each month a different sculpture and sculptor are highlighted.

Click here to see the CDTV video about the sculpture

Sculptor Gallucci enjoys creating pieces that are practical and engage the public in a way to invite interaction. “Purple Whisper Bench” is a good example of this. It allows visitors to whisper into the design’s tube-like structure on one end and be heard at the other end.

Gallucci views the bench format, along with his other frequently used gate and doorway formats, as a way to give the public access to his art. In his artist statement, he notes that “though each can function as a seat, there is an impracticality of form that lures people to explore each bench and try to discover what it is about.”

A sculptor for more than 30 years, Gallucci designs and fabricates his sculptures at a 7,200-square-foot Greensboro, NC studio with the assistance of a six-member staff. Most of his works are commissioned for public, corporate and residential spaces around the country, but he also exhibits in prestigious shows like the famous Pier Walk Sculpture Show held annually in Chicago. His sculptures have also been selected for exhibits in Brisbane, Australia and Hakone, Japan.

“Purple Whisper Bench” is priced at $8,000 and will remain on exhibit until late April 2014. The DCF is a 501c3 organization and gifts toward purchase of a sculpture for permanent public installation are tax deductible. A portion of the purchase price supports DCF projects that benefit the Dearborn community.

Want to visit other sculptures in Dearborn? Click here for an “I Spy Dearborn’s Art in Public Places” card with photos and locations of all 12 MSI 2013-2014 sculptures. 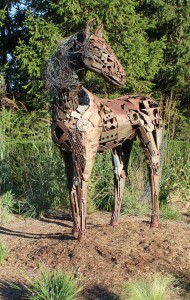 born’s resident mustang, remains standing majestically at the Ford Community & Performing Arts Center thanks to encouragement from the community, and a major donation from Kenwal Steel and residents David and Cherie Bazzy, and the efforts of the Dearborn Community Fund.

Deemed a favorite public sculpture by many who saw it at The Center, “Gaze” by sculptor James Oleson first came to Dearborn in 2012 as one of 12 sculptures on temporary exhibit through the city’s Art in Public Places– Midwest Sculpture Initiative. The project is funded by the Dearborn Community Fund with support from the East and West Dearborn Downtown Development Authorities.

A ceremony was held in October 2016 to thank the donors who purchased the sculpture for permanent public enjoyment in Dearborn. With Dearborn’s majestic iron horse standing sentry in the background, Mayor John B. O’Reilly, Jr. and Dearborn Community Fund Chairwoman Susan Rowe thanked the donors who made it possible to keep the popular sculpture in the city where it has become one of the most popular pieces of local public art.

The Bazzys, Kenwal Steel and the company’s CEO Kenneth Eisenberg, together donated $16,000 to purchase the sculpture from Oleson in 2014 so that the pie ce could continue to be enjoyed by Dearborn residents and visitors. The Garden Club of Dearborn and the City of Dearborn provided additional funding for landscaping and display of the sculpture in its new location on a grassy birm

The DCF had just two weeks in early 2014 in which to pony up the $16,000 to purchase “Gaze” to ensure the horse would stay in Dearborn. The city o 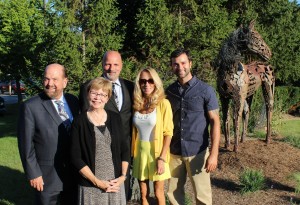 f Hastings had offered to buy the metal sculpture from the artist, James Oleson, Jr.

It looked like “Gaze,” made of recycled and found objects, would be moving to the mid-Michigan city, until the leadership of Dearborn-based Kenwal Steel Corp. stepped up.

Kenwal’s president and chief operating officer, David Bazzy, and his wife, Cherie, work out regularly in the fitness area at The Center where they saw a poster promoting the fundraiser to purchase “Gaze.” Cherie is one of many Dearborn residents who became enamored with the sculpture. David Bazzy said,“Cherie thought it was majestic and fit the spirit of Dearborn.”

David Bazzy noted that after he and Kenneth Eisenberg, the chairman and CEO of Kenwal Steel, “discussed the sculpture and its importance to the community, Kenwal agreed to donate the $16,000 to keep the mustang here.”

Mayor Jack O’Reilly said it’s appropriate that “Gaze” stays in Dearborn, home of Ford Motor Co. and its iconic Mustang, which was manufactured at the for 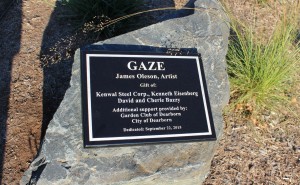 The mission of the nonprofit 501c3 Dearborn Community Fund is to support cultural and recreational programs and projects to enhance the quality of life in Dearborn. Donations towards DCF projects are tax deductible to the full extent permitted under law.

For more information, contact the DCF office at 313-943-5478 or send an email to: dearborncommunityfund@ci.dearborn.mi.us.

Shhhh! Have you heard that “Purple Whisper Bench” by sculptor Jim Gallucci is Dearborn’s sculpture of the month in November? See the piece in West Dearborn’s Starbucks Plaza. Described as artistic, functional and fun, it’s one of 12 sculptures placed … END_OF_DOCUMENT_TOKEN_TO_BE_REPLACED

All News about the Midwest Sculpture Initiatve

Latest News about Pockets of Perception

High school students from across Dearborn collaborate to design and make public art through the Pockets of Perception-We Are One Community (POP) project. POP is an initiative of the nonprofit DCF as it supports programs that enrich the Dearborn … END_OF_DOCUMENT_TOKEN_TO_BE_REPLACED

More News about Pockets of Perception

All News about Pockets of Perception

All News about Youth in Arts Festival

Other Ways to Give